Medieval Hungary: The Island – Saint Margaret and the Dominicans (new exhibition in Budapest) A new temporary exhibition opened at the Budapest History Museum, dedicated to St Margaret and the Dominican monastery on Margaret Island. The story and fate of Saint Margaret, the thirteenth-century saintly princess, has always captured the imagination of people interested in history. The exhibition offers visitors a selection of artifacts never before exhibited anywhere. The occasion for the exhibition is the 750th anniversary of Margaret’s death in 2020, and the fact that in the last two decades our knowledge of the religious institution that was the home of the young princess of the Árpád dynasty has increased considerably. This is primarily thanks to the research of Eszter Kovács, who passed away in 2018 and who had carried out several small-scale excavations in the area of the Dominican monastery. This is how the fragments of wall paintings, probably dating from the 14th and 15th centuries, were found, which are on display for the first time in this exhibition. 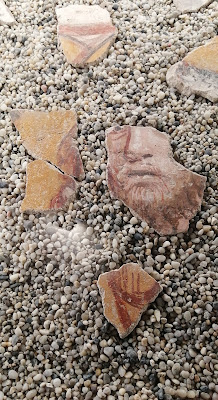 Margaret, the daughter of King Béla IV, was born in 1242 at the time of the Mongol invasion.  We know that she was brought up as a child in the Dominican monastery in Veszprém, which had been founded shortly before, and at the age of 10, she was transferred to the monastery on Margaret Island, which her parents had built. During her canonization process, the testimonies of her contemporaries, recorded in 1276, tell of her dedicated, sacrificial, and self-sacrificing lifestyle, her unending faith in Christ, and the miracles that took place in her life and at her tomb. Margaret’s role model was her aunt, the sister of Béla IV, St Elizabeth of Hungary, who was canonized as early as 1235.

Despite all attempts and royal support, Margaret’s canonization was not achieved in the Middle Ages. It was her brother, Stephen V, who was the first to attempt this: but neither he, nor Ladislas IV, nor their successors from the House of Anjou were successful. We don’t know exactly when she was elevated to the Blessed, but there are many records of this from the 15th century and we also know of many medieval depictions of Margaret. Her cult in Hungary developed soon after her death: she was buried in front of the main sanctuary of the Dominican church, and later an ornate white marble sarcophagus was made for her body, with reliefs depicting her miraculous deeds. Based on her oldest legend and the canonization records, further versions of the legend were written, and a Hungarian-language version was produced at the end of the Middle Ages. The veneration of St Margaret has been almost unbroken over the centuries. Her relics and bones were taken to Pozsony (Bratislava) by the nuns in the 16th century to escape the Ottoman threat. Most of the bones were lost in the 18th century, but perhaps her most famous relic, her penitential belt, has survived, and its ornate reliquary box and an authentic replica of the medieval object can also be admired in the exhibition. Also on display is the funerary crown of King Stephen V (Margaret’s brother), also buried on Margaret Island, from the collection of the Hungarian National Museum, the discovery of which in 1838 marked the start of systematic excavations of the monastery ruins.

Thanks to the excavations, the extent of the former monastery and its church is well-known, and it has been possible to reconstruct the most important phases of its construction. Among the spectacular results of the recent research are the fragments of wall paintings, most of which can now be seen by the public for the first time thanks to the restoration work of Eszter Harsányi. Wall paintings have been found in several parts of the monastery, including the small room where the staircase leading from the monastery to the nuns’ choir was located in the late Middle Ages. The colorful pieces of plaster fragments preserving halos and faces hint at the relationship of St Margaret and her fellow nuns to images: her legend describes the role of Calvary images and other representations in her prayer and contemplation.

When the nuns were forced to flee from the Ottoman attacks in the sixteenth century, the monastery complex became abandoned. It was only used during sieges, for example as a field hospital during the recapture of Buda in 1686. The greatest destruction, however, was not caused by the wars, but by the landscaping of the island in the 19th century, when the owner of the area, Archduke Joseph of Austria, had it turned into an English garden. Like so many other monuments of the Hungarian Middle Ages, our image of the Dominican monastery on Margaret Island must be pieced together from small fragments. The current state of research on Saint Margaret and her cult was presented at a conference organized jointly by the Apostolic Congregation of the Dominican Sisters, the Károli Gáspár Reformed University, and the Hungarian Academy of Sciences, while the Budapest History Museum has collected the material relics essential for the reconstruction. The exhibition will allow us to recall the figure of Saint Margaret and the monastery where she spent most of her life and which became the center of her cult.