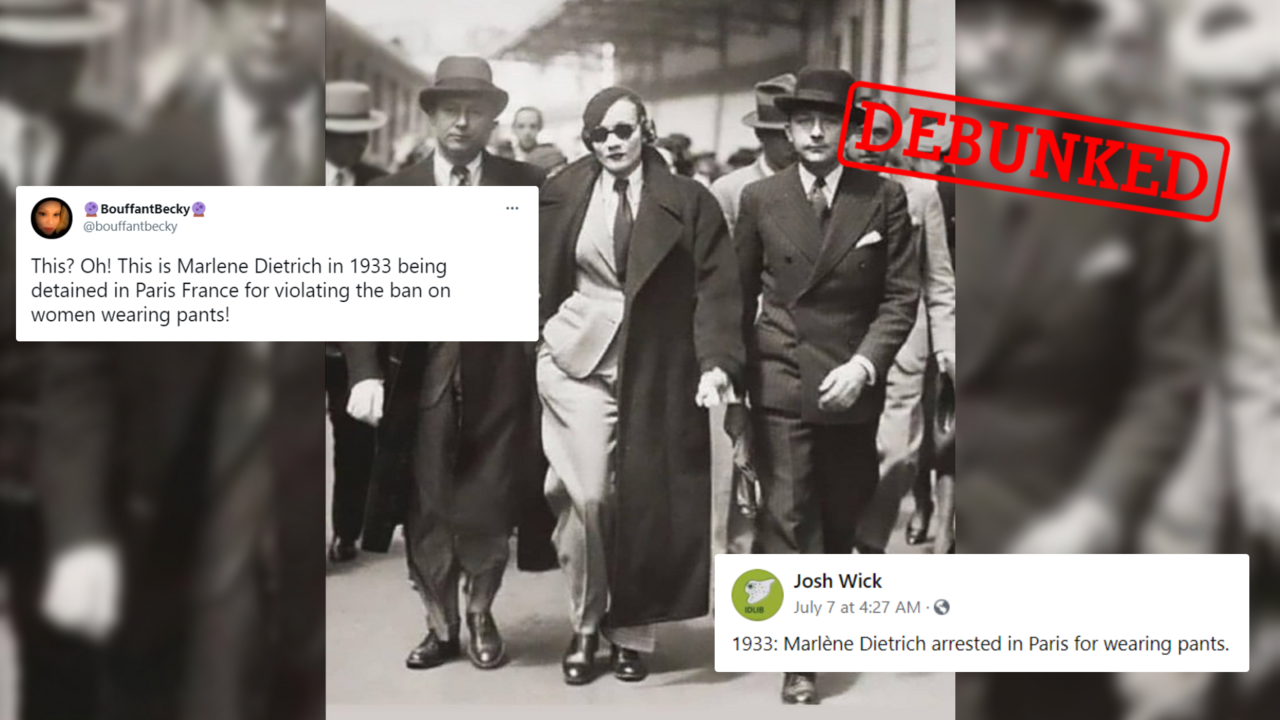 This photo of German actress Marlene Dietrich – supposedly showing her being arrested in Paris in 1933 after ignoring a law forbidding women from wearing trousers – went viral in July. But the men around her are not police officers, and the star wasn’t arrested.

A photo of the German celebrity, dressed in a suit and walking between two men, was posted with this false claim on Facebook here and here, as well as on the page “Historical Images” where it was shared more than 20,000 times. On Twitter, you can find similar posts in French, English, Portuguese and Spanish.

The photo first came to light when it was posted on Reddit in the subreddit “Old School Cool”, which features photos and videos of “history’s coolest kids”. The post garnered more than 1,300 comments.

Find the real story behind this photo using newspaper archives

One comment in the Reddit thread stood out. Gilles Tran, who goes by the username gerardmenfin on Reddit, often debunks false historical information posted on the forum. After being notified about the viral post, he got to work. After a few hours of research, he posted a detailed explanation in the comments. His response was republished on the Reddit page ‘Ask Historians’, and then shared again on Twitter.

The FRANCE 24 Observers team got in touch with Tran to ask him about the photo. He says that it’s possible to find the whole story behind the photo – Dietrich isn’t being arrested for wearing trousers, but has simply just gotten off her train and is walking with her husband Rudolf Sieber (on her left).

By trawling through French newspapers archived on the site Retro News, Tran was able to find out what Dietrich was doing in this photo. After crossing the Atlantic on an ocean liner for holidays authorised by her film studio Paramount, she took a train from Cherbourg to Paris and arrived in the Paris station Saint-Lazare on May 19, 1933. The French press covered not only her arrival in the capital, but also her clothing, which was considered very masculine in style at the time.

“Marlene Dietrich’s trousers” is the headline in l’Œuvre on May 21. “Marlene, the woman … as a man” gasps Comœdia on May 20. Meanwhile, Le Quotidien says simply, “The star […] arrived at the Gare Saint-Lazare dressed as an elegant young man.” A number of satirical cartoons were also published in the French press after the event.

Screen captures of a selection of articles, photos and interviews of Marlene Dietrich published in French media at the time.


None of these articles mentions that the actress was arrested by the French police. Gilles Tran says that because of Dietrich’s celebrity status, the press would have definitely mentioned if she were arrested. Dietrich’s daughter Maria was also dressed like her mother, as seen in this photo on the top right in the newspaper Paris Soir, on May 21, 1933.

Several photos of Dietrich’s arrival, taken by the photography agency Keystone Paris, can be found on Getty Images, as well as in newspapers at the time. None of them appears to show an arrest taking place. You can also find the original photo that was cropped and posted online.

Tran says that what happened in Paris on May 19, 1933 wasn’t Dietrich’s arrest but “only” her well-publicised arrival in the city, wearing an outfit that was somewhat shocking at the time, despite being very fashionable in Hollywood.

It created a lot of buzz. She wasn’t ‘dressed as a man’, but it was her own particular style, very masculine. The French press, including the newspaper l’Humanité, joked about it and published satirical cartoons – less aimed at Dietrich herself than at men who they said were ‘losing their trousers’.

That same day, the wife of the head of Paris police invited Marlene Dietrich to an event that would take place two weeks late, and it seems unlikely that she would have been invited if she were under arrest at the time.

The way I see it, it was more something that people found funny. It was a debate: did it suit her or not? At the time she was a global star, like Lady Gaga nowadays. She was extremely well-known. So people mocked her but also totally admired her. There are lots of interviews where she talks about it, and she justifies herself, saying that it’s partly provocation and also partly an artistic gesture. What’s funny is that she was invited to a police gala with the wife of the city’s police chief! The idea that the police chief would want to damage her reputation in any way doesn’t make any sense; he wouldn’t have had her arrested and then have invited her to a party the same day.

The actress didn’t really break a law by wearing trousers

So what about the law banning women from wearing trousers? In his analysis of the photo published on Reddit, Tran explains that there was a ruling by the Paris police that dated back to November 7, 1800, saying that “any woman wishing to dress as a man must go to the police prefecture to obtain authorisation, which can only be given on the basis of a certificate from a health officer”.

This order was meant to be more dissuasive than anything else: it was never enforced and there was no clear punishment linked to it. The ruling’s objective was to make it harder for women to access certain jobs by pretending to be men, as this article by the French historian Christine Bard explains.

With the changing styles of Parisian women, the ruling became obsolete, and wasn’t applied at all from the start of the 20th century. The controversy around the ruling helped to create the rumour of Dietrich’s arrest, says Tran.

My interpretation is that it was the Americans that made up this story. I found traces of it in French newspapers, but it was seen more as a joke, it wasn’t serious. But people were convinced that it still existed, like during the trial of Violette Morris [Editor’s note: a French athlete who took the French Women’s Sports Federation to court in 1930], because a woman who wore trousers couldn’t be a good woman. So even though it hadn’t been enforced for 50 years, in reality we don’t really know how many women actually got the authorisation or received fines.

In 2013, the centre-right politician Alain Houpert brought the old ruling back into the limelight in a question to the Ministry of Women’s Rights, noting that the ruling had never officially been repealed, and would therefore still be in effect. The ministry responded by saying that the ruling was incompatible with the values of the 1946 French Constitution as well as the European Convention on Human Rights, and so it has no legal force and cannot be enforced.